ACC students attending Community College Day at the Capitol met with representatives of several state lawmakers to advocate for issues that impact their college community.

Two groups of Austin Community College students recently converged on the Texas Capitol to advocate on behalf of their peers and their future career fields.

“These are great opportunities for our students’ voices to be heard and for them to know that their voice makes a difference,” says ACC President/CEO Dr. Richard Rhodes.

The first group of about 70 ACC students joined community college peers from across the state for Community College Day at the Capitol on February 7. The delegation discussed pending legislation that would allow some two-year colleges to offer certain bachelor’s degrees, state funding for higher education, and tax exemption periods for textbooks.

Rita Aniekwu, one of several ACC nursing students attending, said she wanted to show her support for a pathway that would give registered nurses (RNs) with associate degrees the opportunity to pursue a bachelor of science in nursing (BSN) degree at a community college.

“ACC is one of the best colleges around when it comes to nursing schools,” she said. “I hope to see the movement carry forward. I know it will be very, very beneficial to a lot of people, especially someone like me.”

ACC and other Texas community colleges are seeking approval to offer the BSN to address regional nursing shortages and the growing need for nurses with bachelor’s degrees. ACC hospitality management students met with lawmakers at Converge on the Capitol, the largest industry legislative event in the nation.

Another 50 ACC students joined more than 800 hospitality industry professionals from across the state for Converge on the Capitol held February 16.

The students from ACC’s hospitality programs spent half the day learning about issues and priorities for their future career field, such as hotel tax rates, funding for tourism promotion, and school start dates in August. They later visited offices of legislators representing various Austin districts.

Michelle Fitzpatrick, chair of ACC’s Hospitality Management Program, said that event was a valuable hands-on learning opportunity as well as a chance for students to network with industry executives and potential employers. ACC participants were acknowledged during the event’s opening session as the largest student contingent attending.

“Having this kind of experience is truly priceless,” she says. “Students gain a new appreciation and understanding of the issues that affect our industry and the impact they can have.”

See photos and video from Community College Day at the Capitol: 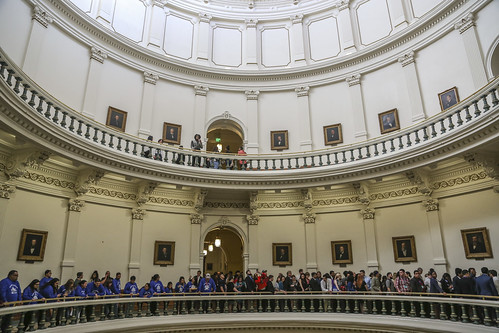