Guests commemorated the construction milestone by signing a 30-foot-long steel beam before it was raised and placed at the top of the building framework. A crane lowered the final beam adjacent to a small evergreen tree, a traditional symbol of a successful topping out that’s thought to bring good luck to a building’s future occupants.

“This facility is going to serve our community for many decades — thousands and thousands of people — and that’s a lot of good luck,” said Marty Burger, vice president of American Constructors, the project’s construction manager. He added that design and construction teams had worked closely with ACC to deliver a building the public deserves and within budget.

“We’re standing in front of what the future holds for this community,” he said “With the support of the Leander community we’re bringing that vision to fruition.”

Scheduled to open next summer, the San Gabriel Campus will serve one of the fastest-growing areas in the country. The three-story campus will offer transferable general education courses and career training, initially accommodating up to 2,500 students. It will feature a 150-seat ACCelerator learning lab integrated with a library and tutoring areas, multipurpose rooms for community use, and open spaces for studying and gathering, including a 3,900-square-foot rooftop terrace.

The first major addition to Leander’s Transit Oriented Development District, the campus is expected to anchor future development and serve as a hub for community engagement.

“Our growth is extraordinary. The need for this campus is great,” said Leander Mayor Chris Fielder. “I’m only hoping that 100 acres is enough.”

View photos from the event below: 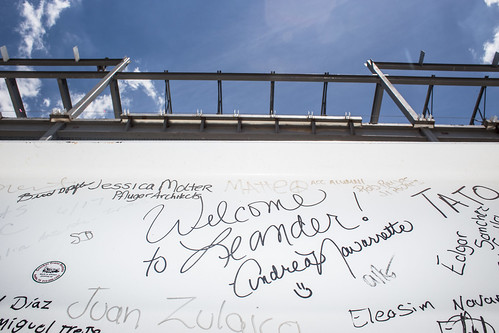