With heartfelt, spirited, and inspiring tributes from college and community leaders, Austin Community College celebrated the groundbreaking of its new San Gabriel Campus in Leander April 21.

Heavy rains ― right up until the morning of the event ― forced the ceremony to be relocated from the campus site to the adjacent Leander Capital Metrorail station. Storm clouds gave way in time for the 250 guests to hear remarks and enjoy special performances by re-enactors from the Texas Military Forces Museum and the Leander High School Blue Belles dance team.

“For a guy like me who has thought about this campus or worked on this campus pretty much every single day for almost 12 years, this is a very special day,” said Dr. Vic Villarreal, chair of ACC’s Board of Trustees and former Leander City Council member.

Leander High School ROTC cadets and students from Leander’s Bagdad Elementary School kicked off the event with a flag ceremony that was followed by comments by ACC President/CEO Dr. Richard Rhodes. Members of the Living History Detachment from the Texas Military Forces Museum fired a volley to herald a proclamation from Leander Mayor Chris Fielder declaring April 21 as Austin Community College Day in the city of Leander.

Fielder called the new campus a great example of working together toward a shared vision. Villarreal and fellow trustee Allen Kaplan further described how the campus emerged from discussions that began more than a decade ago. Kaplan acknowledged the individuals involved in the early planning as well as the voters who overwhelmingly approved the capital improvement bonds funding campus construction.

Scheduled to open summer 2018, the 106,000-square-foot San Gabriel Campus will have an initial capacity for 2,500 students and feature classrooms, science labs, and the college’s second ACCelerator learning center. The campus will be designed to grow with Leander, currently the fourth fastest-growing city in the state. Long-term plans for the 100-acre campus site include an early college high school.

Leander ISD Superintendent Bret Champion called the groundbreaking a celebration of the many people who are committed to the education of the area’s residents – from birth through high school and beyond.

ACC alumna Shari Alexander, a sales executive with a local software firm, shared how ACC helped her go further as a single mother of six who was 20 years removed from the classroom.

“I attribute my academic success to the excellent foundational classes at ACC and good old-fashioned hard work,” she said, adding that all six of her children had taken classes at ACC, and that her 12-year-old granddaughter would be able to attend the San Gabriel Campus.

“Education is the key and ACC is the door to the future, and how exciting that lives and generations are going to be transformed starting right here at this Leander ACC campus,” she said. “If I was asked what one gift I would like to give the world, it would be education. But if I was asked what’s the one gift that I would like to give to my Leander community, it would be an ACC campus.” 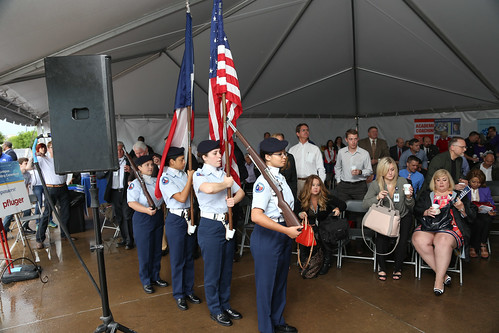