The Riverbat contingent was about three times larger than last year and one of the largest among the colleges and universities represented.

Executive Vice President/Provost Dr. Charles Cook joined other local education leaders in congratulating the class of 2016. RB the ACC Riverbat showed off his moves to win the mascot dance-off 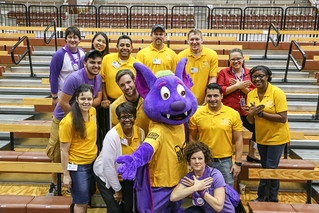