At its January 17 regular session, the Austin Community College District Board of Trustees welcomed newly elected trustees and recognized outgoing board members, reviewed the 2016 Student Success Report, and heard an update about ACC courses that use free or low-cost open educational resources. See other items discussed and a video of the proceedings on the Board Meeting Agendas, Minutes, and Recordings webpage. ACC’s Board of Trustees with Dr. Rhodes

ACC President/CEO Dr. Richard Rhodes recognized departing trustees Allan Kaplan, Jeffrey Richard, Guadalupe Sosa, and Dr. Victor Villarreal.  Each expressed pride in the college and its students and gratitude to the ACC community. Kaplan, the board’s longest-serving trustee, called upon the new trustees to carry the college forward with the trust and integrity.

“You have been elected to serve on one of the best community college boards in the nation and certainly the best public body in Central Texas,” he said. Cook noted a few college initiatives and achievements in the four focus areas of connection, entry, progress, and completion. Some highlights:

Dr. Rhodes read a proclamation by the board honoring founding Trustee Will D. Davis Sr., who passed away December 12. Davis served three terms as president of the Austin ISD Board of Trustees overseeing ACC and remained a board member until 1982. The ACC board presented the proclamation to Davis’ son Will Davis Jr. Dr. Rhodes with Will Davis Jr.

View more photos of the ceremonies below: 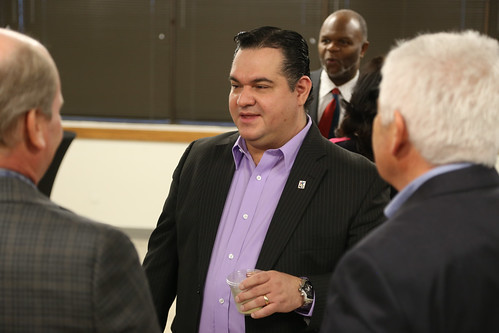 Tags: Board Briefs, Board of Trustees, OER, Student Success Report