Austin Community College (ACC) launches a new app development program in partnership with Apple for students who want to pursue careers in the fast-growing app economy. The program features Swift curriculum, one of the world’s most popular programming languages.

“We are honored to be among the first community colleges nationwide to offer this innovative curriculum,” says Dr. Richard Rhodes, ACC president/CEO. “This is an exciting new partnership. Apple shares in ACC’s vision to expand educational opportunity.” “We’ve seen firsthand how Apple’s app ecosystem has transformed the global economy, creating entire new industries and supporting millions of jobs,” says Tim Cook, Apple CEO. “We believe passionately that same opportunity should be extended to everyone and community colleges have a powerful reach into communities where education becomes the great equalizer.”

The App ACCelerator: Austin Can Code Program at ACC takes students with no programming experience and enables them to build fully-functional apps of their own design. Courses also are available for IT professionals looking to expand their skills with advanced development techniques. Students will learn to code and be able to design apps, gaining critical job skills in software development and information technology.

“We set a regional workforce goal to take 30,000 people into middle-skill jobs. We want to move 10,000 people out of poverty. This program today, where students can learn the coding at ACC to be able to develop apps for iPhones, is just one more way we can ladder-up parts of our community,” says Austin Mayor Steve Adler.

Currently, there are more than 7,000 job openings in tech fields in Austin. Last year, U.S. software developers earned $5 billion through the App Store, a 40 percent increase over 2015. “It’s no coincidence that Austin is a focal point in a world-wide information and knowledge economy.  We’re rich with knowledge and intellectual opportunities created by our higher education institutions.  ACC is a key part of our success because it so nimbly leverages relationships with industry leaders. This partnership with Apple is another jewel,” says Texas Sen. Kirk Watson.

View photos from the announcement: 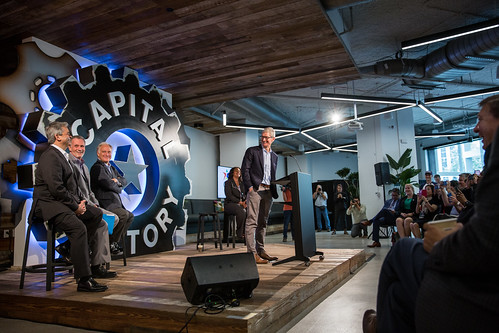